All these photos were taken by Brett Weinstein, a local real estate broker and 30+ year resident of Berkeley. In his own words:

"At first, my interest in the murals was incidental to the fact that 1) I simply like to look at buildings (having attended grad school in Architecture at Cal has something to do with this), and 2)working as a Realtor for the last 25+ years, I spend a lot of time driving around looking at houses. While I have no technical skills as a photographer, I set out one sunny day to see how many murals I could find just from memory. This resulted in about 30 different locations, with several pictures taken from each larger piece of work. Then I set out on my bicycle and went on a serious hunt. Over a couple of weeks, I was thrilled to find many more. Just when I thought I had looked everywhere, I’d find another. And then another. The result can be seen in the linked gallery.

Unlike graffiti, which I’ll loosely define as an unauthorized and illegal defacing of property and which is most often painted over quickly, the works featured here are usually created with a building owner’s permission and are meant to be lasting works of art. Many have been in place for several years, and some date back to at least the early 1970’s. Some have been lovingly maintained, while others have been left to fade in the sun or be covered from view by growing shrubs and trees. Many are not signed so the artists are unknown.

Some of the works are quite large, covering whole sides of buildings, and thus do not lend themselves to standard photographic formats. I could have taken panoramic shots and stitched them together, but decided instead to get closer in so that the viewer can appreciate the sometimes exquisite level of detail that exists. That is why some locations show up to 7 different images.

All the works are in outdoor locations, within City limits. Some are out in the open and visible while driving, biking or walking by. Others are tucked away under overhangs, or in breezeways, or in otherwise not-obvious locations. Most are on either commercial or institutional buildings, but a few are also on houses or other types of structures.

As to their locations, you'll have to forgive me for not telling you outright. I invite you to go out and find them yourselves, like a treasure hunt! Berkeley is not such a big city so you really could find them all within just a few outings. Get on your bicycle, take the kids and go explore this artistically vibrant city of ours."

P.S. If you really want to know about a particular location, contact me with the picture description and I’ll tell you where it can be found. 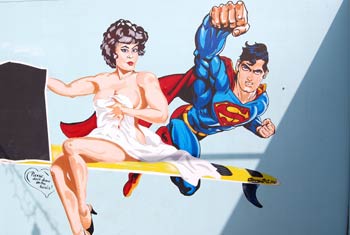 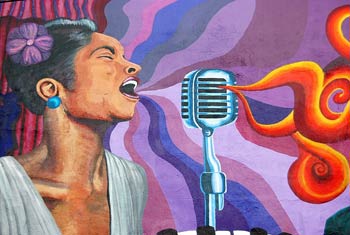